“Canned jokes are defined as those which are presented with little obvious relationship to the ongoing human interaction. Situation jokes are indicated as those which are spontaneous and have, to a major extent, their origin in the ongoing interpersonal (or intrapersonal) process. The practical joke category is defined as that made up of jokes which are both presented and spontaneous—in that the joker consciously contrives his joke, but must depend on the unfolding of an interpersonal (or intrapersonal) process for the presentation of his joke.” – William F. Fry, “Sweet Madness: A Study of Humor”

It is a weary thing to hear someone begin a canned joke. There is a little of the forced march about it. Because the canned joke does not have its “origin in the ongoing interpersonal (or intrapersonal) process” it seems to stand outside of — and even sometimes encroach upon — that delicate process.

We have created canned jokes, small talk, clichés, and other security blankets for occasions when we are depleted or afraid, unable or unwilling to bear the difficulty of communicating. Being nimble and spontaneous, even on a banal subject, requires presence of mind; it is work to listen attentively and speak thoughtfully.

Communicating for real with the person in front of you also bears some emotional risk: it is difficult to not know what to say next. We must trust our interlocutors to be patient while we pause or stumble, to care enough about our meaning to give us time to state it as best we can. We risk being boring, making mistakes, sounding foolish. And all this peril is found in simple, quotidian conversations with nothing at stake besides our own social equanimity.

When it comes to political disagreements, the risks are compounded. In substantive discussions about how the world should go, on top of all the hazard and toil already stated, we risk being poor champions of the ideas and principles we cherish, leaving them open to ridicule — not because they are deficient but because we are inept in defending them.

These problems are exacerbated still further by our current context of information glut. David Foster Wallace has made a case for the relationship between generalized information anxiety and the scratchy, snarling state of political discourse in the United States. He writes:

“…we are starting to become more aware of just how much subcontracting and outsourcing and submitting to other Deciders [me: editors and winnowers-down of content] we’re all now forced to do, which is threatening (the inchoate awareness is) to our sense of ourselves as intelligent free agents. And yet there is no clear alternative to this outsourcing and submission.”

“Part of our emergency is that it’s so tempting to do this sort of thing now, to retreat to narrow arrogance, pre-formed positions, rigid filters, the ‘moral clarity’ of the immature. The alternative is dealing with massive, high-entropy amounts of info and ambiguity and conflict and flux; it’s continually discovering new areas of personal ignorance and delusion. In sum, to really try to be informed and literate today is to feel stupid nearly all the time, and to need help.”

In many cases, as Wallace suggests, our response to feeling confused and overwhelmed is to seek out the safety of stable positions — and, I would add, stable ways of stating those positions. We put on a carapace of freeze-dried arguments and talking points. We curl, woodlouse-like, into a posture that will protect us from the vulnerability of not knowing what to say next and the pain of sometimes not knowing how to defend the ideas (however inarticulate) that we love and even live by.

Of course, one’s own exoskeleton fits quite comfortably but — oh — to encounter the carapace of another is maddening. The carapace of the other is brittle and false and cries out to be cracked. The temptation to shatter this rhetorical armour is strong not necessarily because it is urgent to defeat the other person in argument, but because it is galling to look into the face of another — a marvelous primate endowed with 100-billion neurons — to watch their mouth open, and to listen as a half-remembered editorial or some other unreconstructed bit of flotsam tumbles forth. It is an affront not only to oneself but to “the ongoing human interaction.”

Having experienced this affront — and having surely visited it upon others — I think I understand some part of the inspiration for the video below. But it bothered me when I first watched it several months ago and since then my distaste has only intensified. 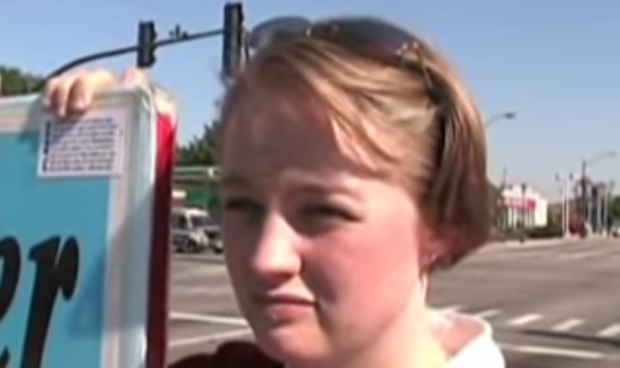 At first I didn’t know why it troubled me; it was just more digital pamphleteering. Only later did it occur to me that the (inherently pissy) gotcha approach of the video felt the more impoverished because the people being interviewed, by and large, do not respond with defensiveness or anger.

They respond with pause. Most say something like “I’m sorry, I don’t have an answer.” The fourth interviewee is silent for a full ten seconds (2:39-2:49), pondering the question that has been put to her. A couple offer up quiet, awkward smiles: they have been exposed in some way, and they stand and take it.

We are invited to scorn these people and their uncertainty. (“You’ve been doing this work for how long and you’ve never thought about this?” is the follow-up question.) But if what the interviewer wants from these street-corner sloganeers is a moment of humility, of reflection, of self-interrogation, he gets it. They each go off script, giving him access to a corner, however small, of their private uncertainty.

This video presents a rupture — seven ruptures, actually — in the mechanical exchange of talking points that seems sometimes to constitute the bulk of our public discourse. The architect of these ruptures might have used them as opportunities to escape the forced march, to invite his rhetorical opponents to escape with him, out of the can, into the open. But he wastes them. And once they are wasted none of us can have them back again. Because next time, those people will have a soundbite ready.

RSS Feed
Amy Langstaff is a writer and consultant based in Toronto. She holds a literature degree and a diploma in cabinetmaking — the latter irrelevant to her current work but attesting to a meticulous nature. For more Amy Langstaff, click here.