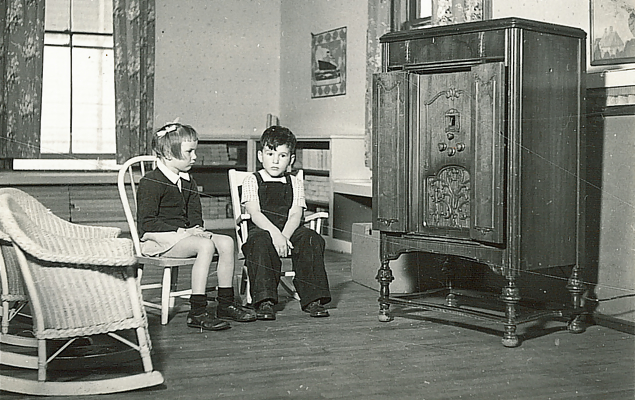 I take my kids’ musical education very seriously. My three boys are all learning classical piano, they tinker with other instruments, and I’ve got music on in the house all the time, from Beethoven symphonies to Cuban jazz to Johnny Cash, Aretha Franklin and the Beastie Boys, you name it. But while I believe that I’m granting them a musical education that will serve them in very good stead later in life, for them it’s not always easy to get a sense of timelines. Anything before 2005 seems like ancient history, and the music I listened to in high school is no less remote than Robert Johnson or Mozart.

It’s not an easy thing to teach a 6 year-old why Elvis Presley’s dancing style was radical if he can turn on MTV and see Madonna grab her crotch in a video that is over 20 years old! One of my boys recently asked me, “Did Nirvana come before or after Elvis?” and I felt my heart sink — I mean, isn’t it obvious? Nirvana could not possibly exist before Elvis! It’s partly Elvis’ death that opens up the whole realm of fame-hate that makes Nirvana so angry, tragic, and beautiful! Haven’t you learned anything from me?! Am I a failure as a father?!

But I had a weird opportunity recently to rectify some of their confusion. My 8 year-old went to a classmate’s birthday party, and one of the gifts in his loot bag was a CD burned with some of the birthday girl’s favorite songs. Great God, bless the mix tape, in all its incarnations! Amidst the latest sugar-pop samplers (“Gangnam Style,” Nicki Minaj) were a few humorous tunes that gave me the most pleasure, including Adam Sandler’s “Chanukah Song” and this by Weird Al Yankovic.

Weird Al, as everyone knows, is a colossal genius who deserves to be awarded the Nobel Prize in Awesomeness. He has been demonstrating the inherent silliness of pop music for over 30 years, has sold over 15 million records, and can make everyone from Michael Jackson to Green Day seem funny. The King of Pop himself was a big fan, and you can see why. In music, imitation isn’t the sincerest form of flattery — parody is, because parody assumes that an audience will get a double-edged pleasure by making fun of greatness while also reveling in its riffs, melodies, and beats. It assumes that greatness can take it.

Don McLean has admitted to hearing bits of Weird Al’s version of “American Pie” during his own concerts (how many times has that poor guy had to sing that song by now?!), and it’s rumoured that Jar-Jar Binks himself has sent congratulations from Naboo.

So we’re listening to Weird Al in the minivan on the way home from the birthday party, and I realize that my boys are missing out on a good chunk of the fun. They are fully versed in the details of the Star Wars movies (the recent ones, alas, as well as the originals), and so are deriving quite a bit of pleasure from Weird Al’s lyrical genius. But they have no connection to the original tune, Don McLean’s transcendent “American Pie.”

So I dig out the tune and start trying to explain what an anthem is, how this song, even in its sloppy genius (Why would anyone drive his Chevy to the levy anyway?), could define a certain time, mood, and feeling. It’s all very hazy, but then they ask me what the song is about, and we get home and I’m telling them what he means by “the day the music died,” and then I’m showing them clips of Ritchie Valens.

And the incomparable Buddy Holly.

And then they can see the chain, or at least one strand of it. From Star Wars back to Peggy Sue. I am not a complete failure as a parent after all. Thanks, Al. And thanks to Lily Rose, birthday girl extraordinaire.

On Nostalgia, Ironic Or Otherwise: Part 1

On Nostalgia, Ironic Or Otherwise: Part 2

A Book & Its Cover

Just Letting You Know That I’m Going To Fall

RSS Feed
Adam Sol is a poet, papa, professor, point guard, and occasional pundit. His books include "Complicity," a collection of poems, “Jeremiah, Ohio,” a novel in poems, and "Broken Dawn Blessings," poems linked to traditional Jewish morning prayers. He is also the author of "How a Poem Moves," a field guide for readers of poetry. He is known to cover Steve Earle songs, with mixed success. More Adam Sol here. Photo by Barbara Stoneham.