1) To The Great Mystification Of Those On Both Sides

In August, 2011, Berliners marked the 50 years since Communist Party Leader, Walter Ulbricht, gave the order. Berliners were taken by surprise. One Sunday morning in August, in only a matter of hours, almost the entire perimeter of West Berlin — a hundred miles — was sealed off. Why? “To put a stop to the hostile activities of the revanchist and militarist forces of West Germany and West Berlin,” explained the GDR Council of Ministers. Real reason? To put a stop to steady desertion of its citizens; over three million people had already fled to West Germany, unhappy with social and political developments in the GDR.

The Wall followed the zigzag edges of the city’s Soviet sectors, which included Pankow, Prenzlauer Berg, and Mitte, the historical district. This meant a line right through the center: cross-city avenues and railway tracks now led to dead-end streets. Shops and cinemas in neighborhoods bordering the Wall soon closed up.

With the construction of the Wall, the incompatible claims to the city — by the US and its allies on the one hand and the Soviets on the other — had been resolved. Germany had been divided into two separate states in 1949, and both German regimes named Berlin as their capital city. After a tank standoff at Checkpoint Charlie and a few cautious expressions of indignation, the West accepted the Wall, a little relieved that Berlin would no longer be such an urgent and heated Cold War battlefield.

3) Peoples Of The World, Look Upon This City! 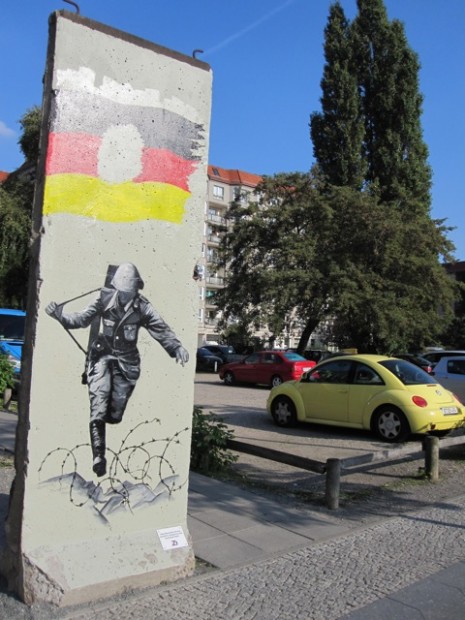 The archive images of the “day that shook the world” remind us just how brutal it was to construct a dividing Wall without warning. Everywhere bewildered Sunday strollers encountered troops and police. Neighbors and families discovered all at once that they had been forcibly separated: “As a border policeman, I saw how a small girl who was visiting her grandmother in East Berlin was held back by the border soldiers and not allowed to cross into West Berlin. Even though her parents were waiting only a few meters from the barbed-wire barriers that had already been laid out, the girl was simply sent back to East Berlin.” This is how 19-year-old Conrad Schumann explained his decision to jump the barbed wire and flee to the West on August 15, 1961. The moment was captured by West German photographer Peter Leibing, and his iconic photo appeared in newspapers the world over. Conrad Schumann was the first of over 2500 border guards to escape to the West between the construction and the fall of the Wall.

In their haste, East German authorities made use of apartment buildings as part of their “antifascist protective rampart” (it was prohibited to refer to the edifice as “Wall”). Along Bernauer Strasse, lower-floor windows and doors were walled up, while the sidewalks below remained part of the West.

Young Monika Schaar was one of the many people separated from her family. At 2:19-2:42 you see her waving tearfully to her mother, who is not allowed to come down from her apartment even on her daughter’s wedding day. It isn’t long before East German police are ordered to prevent “every form of contact, waving [and] exchange of greetings” across the border.

4) Every State Stands Before Its Servants

East Germans who spoke out against the Wall were arrested and imprisoned. To get to the West, they would now have to risk their lives. As the months passed, border fortifications improved. By the mid-1970s, the “border barrier system” had been more or less perfected, with trip wires, dog runs, anti-tank obstacles, anti-vehicle trenches, spiked gratings, and the brightly illuminated “death strip” — carefully surveyed from watchtowers. 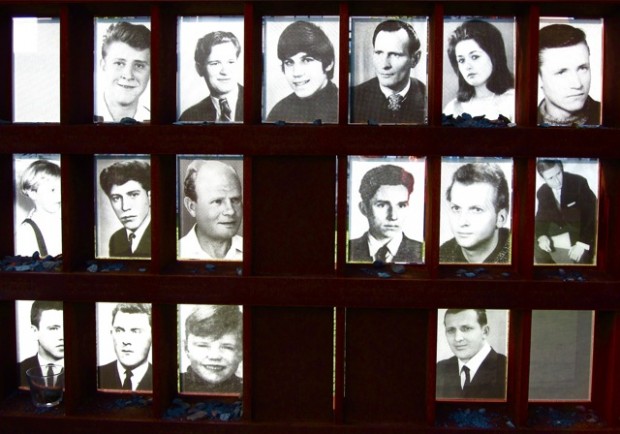 Despite these measures, in the 28 years of the Wall’s existence, over 5000 GDR citizens succeeded in escaping — using forged documents, crawling through tunnels, swimming across canals, hiding in secret compartments in cars and trucks, or even ramming barriers with trucks and bulldozers. One can only imagine the number of failed attempts. We know that at least 136 people died at the border, the majority of them murdered by border guards. The order was “shoot to kill,” at least tacitly, and guards could be punished for missing their targets. How many others were killed? The GDR made an effort to cover up these embarrassing incidents, and it was the Stasi‘s job to have bodies “disappear.”

In 1973, East German psychiatrist Dietfried Müller-Hegemann published “The Berlin Wall Disease,” a book of case studies on patients suffering psychological ailments directly attributable to the presence of the Wall. His patients experienced the Wall as a violent psychic imposition, one whose permanence made their depression and anxieties especially difficult to overcome.

Presumably people on both sides of the Wall would have been susceptible to “wall disease.” West Berlin was an island, after all, enclosed on all sides. However, whereas East Berliners were instructed to live in denial of the Wall, to behave as if it weren’t there, West Berliners were invited to express their scorn for it, and to gaze into the increasingly mysterious world on the other side. In 1986, Gerd Conradt spent 12 hours doing just that. The result was a short film called “Ein-Blick,” meaning “In-Sight.”

As it turns out, East German border guards kept fastidious records of daily incidents along the whole length of the Wall. If a man threw his hat over the Wall from West Berlin, a guard made a note of it in the record books. Guards also made notes about each other — motivated praise or petty denunciation: “Due to his tactically appropriate behavior he was able to arrest a border violator” or “When bored, he used his feet to make shapes in the snow when on duty” or “He concealed his true opinion of East Germany” or “He did not deem it necessary to leave the tower to relieve himself.”

In 1995, author Annett Gröschner and photographer Arwed Messmer came across a cardboard box in the Military Archives in Potsdam. Inside were a few rolled-up 35mm film negatives with photos of almost the entire length of the Wall, taken from the East. Gröschner and Messmer have dug into the archives and created a fascinating exhibition.

7) A Country Bleeding To Death

“The GDR, Germany, is the country where it must be determined that Marxism-Leninism is right, and that communism is the higher, better social order for industrial nations as well… If socialism does not prevail in the GDR, if communism does not show itself to be superior and viable here, then we have not won.” So said Anastas Mikoyan, Soviet First Deputy Premier, in June, 1961. The Wall was the first undeniable sign that the Soviets were losing the battle. Thomas Hoepker‘s photos provided a few other clues.

While young people in East Berlin enacted bourgeois rituals, young people of isolated, scrappy West Berlin were working hard to throw off the burdens of their fathers, by radical political action or simply by creating wild, underground party scenes. Always though, bordering their dreams and yearnings, the Wall.

Even though the Wall was an expression of incompatible differences, it was always and increasingly a symbol of the fundamental bond between all Germans. On the one hand the GDR was seen as a dark, oppressive, authoritarian society, but it was also felt to be a storehouse of traditional German virtues, unspoiled by commercial imperatives and insidious American influences.

In 1972, the two Germanies signed the “Basic Treaty,” and the GDR was soon after accepted into the United Nations. But détente did not make crossing the border any easier. In fact, the number of Stasi employees doubled in the 1970s; spying and surveillance in East Berlin is said to have foiled over 90% of escapes at the planning stage in the 1980s. More than ever, however, the GDR was ransoming political prisoners to West Germany for ever greater sums. In 1970, in return for 888 prisoners and for 595 “family reunifications,” the West German government paid 50 million DM. In 1975, 100 million DM were handed over; in 1984, 388 million DM. This income held the flailing East German economy together, for a while.

How it happens: Hungary dismantles its part of the “Iron Curtain” in May, 1989. Tens of thousands of East Germans flee to Austria. Mass exodus is accompanied by mass protest — in Leipzig for example. The East German government, uncertain how to deal with the nationwide protests, and on the brink of bankruptcy, is paralyzed. At the beginning of November, 1989, the Western border in Czechoslovakia opens up. In a panic, the Council of Ministers decides to announce the possibility of permanent emigration to the West for applicants in possession of a passport — knowing that only four million citizens have passports. But in a press conference cock-up, politburo spokesman Günter Schabowski gives the impression that the new travel regulation means borders are open for crossing “immediately, without delay.” The headline story in Western media outlets that evening (though not entirely accurate): “GDR opens border.” There is an immediate rush at all the Berlin border crossings.

Border employees have been given no directives and can get no answers from their superiors; senior ministers are still in a Central Committee meeting, completely unaware of what’s happened at the press conference. At Bornholmer Strasse in Prenzlauer Berg, passport controllers — bewildered and intimidated by the crowds — take it upon themselves to open the gates. And so, at this spot, at 11:30pm on 9 November, 1989, the Wall cracks open. Spiegel-TV reporter Georg Mascolo with cameraman Rainer März are there to document this incredible moment in history.