Presented on stage by Caroline Adderson at Ryeberg Live Vancouver 2013 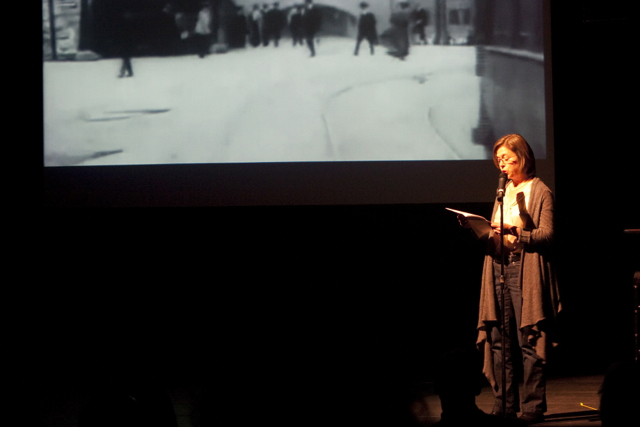 The film you are about to watch had its first public screening in a small room on the Boulevard des Capucines in Paris on December 28th, 1895. The paying audience sat facing a white wall. At the back of the room, August and Louis Lumière readied a large machine of their own invention, a Cinématographe, that had been inspired by the technology of the sewing machine. A camera, developer and projector combined, the Cinématographe burned a series of still images onto a reel then ran these images in front of a light bulb. In other words, the Lumière brothers had found a way to make still pictures move.

Among the films the Cinématographe projected that evening was a continuous, real-time shot of a steam train pulling into a station; it’s called “The Arrival of a Train at La Ciotat.” The reaction to the film is legendary. At the sight of a train heading straight towards them, several people in the audience screamed and ducked; others ran to the back of the room.

I notice you didn’t scream or run to the back of the room. This film doesn’t provoke an emotional response today; to us it’s a brief, visual document of a bygone time. We live one hundred and eighteen years in the future, a future where moving pictures surround us. That a two-dimensional image might start moving is a given.

December 28th, 1895 changed the way we experienced visual representations of the world. In the months that followed that first screening, Lumière projectionists travelled the globe, showing the film in Belgrade, Copenhagen, Montreal, Bombay, Buenos Aries, Mexico City, Havana, Osaka, and even Dakar. Audiences were transfixed by what they called “living photographs.”

Have we come too far to feel what those original, naive audiences felt? Surprise at the sight of the train in the distance actually coming down the tracks toward them, then amazement – how? How could a picture move like that? I imagine the surprise rapidly gave way to alarm — It’s coming right for us! It’s not going to stop!

In 1898, George Albert Smith of Brighton expanded on the Lumière brothers’ work. He attached a camera to the front of a train and for the first time audiences became the camera’s eye. It was like a magic trick. Here’s an example of this technique from 1907, filmed locally by American filmmaker William Harbeck.

You are floating north along Granville Street from Georgia up to Hastings; you turn east onto Hastings, then north onto Carrall and west on Cordova, south on Cambie, and over to Robson Street. Imagine how thrilling this omniscient ride would have been for people who had never seen fixed images in motion. I can almost hear the audience calling out to the celluloid pedestrians — so many of them! — who blithely pass right in front of the street car, and to the horse carts, to those long-ago dogs, Get out of the way!

What I want to do with the next three videos is evoke some of that surprise and amazement (I’ll skip the alarm) that early cinema-goers experienced. Each of these videos has some connection to one of the four elements. The trains, powered by steam, represent Fire.

The next belongs to Earth.

The first image you’ll see in this video shows earth disturbed by an excavator, itself forged from metal from the earth, powered and lubricated by fossil fuels extracted from the earth, a dirty, masculine machine commonly operated by men. Then comes the surprise.

This video delights me much the way drag queens do, because it breaks open our expectations of what “heavy,” “cumbersome” and “masculine” mean.

The filmmaker is Canadian dancer and choreographer Anne Troake, who directed the three male excavator operators by walkie-talkie. First she had to learn the names of the machine parts and how they worked to ensure she could properly direct her dancers, who, in turn, had to respond to rhythmic instructions — “down two-three, up two-three” — not the directives usually heard on a construction site.

But the operators did it. They made the excavators dance. These heavy machines became light. Therein lies our amazement. Who knew an excavator could arabesque?

We don’t expect heavy machinery to dance. Neither do we expect to see a wheelchair underwater. Sue Austin is a British performance artist who created this work for the Cultural Olympiad of the 2012 London Games. After the initial surprise of seeing a wheelchair out of its element, it was Austin’s flowing hair and the way it mimics the curves in the coral that drew me; divers don’t normally leave their hair free. I was impressed by her languorous, sweeping arm movements, too, where a person in a wheelchair is usually maneuvering the pushrims. Then I noticed the transparent fins close to Austin’s feet. These, together with the flowing arms and hair, reminded me of T.S. Eliot’s poem.

I’m not a swimmer. I’m actually afraid of water. But I would love to be Sue Austin, to sit in a chair and just by swaying my arms float through those coral chambers among the curious fishes.

The main problem with being wheelchair-bound, of course, is not the chair, but the obstacles in its way, the curbs and stairs and concrete barricades that limit the disabled person to pre-defined access routes. In this video Austin has entered a stairless, curbless world. Underwater, she has earned her freedom and our envy. And we watch amazed.

Theo Jansen is a Kinetic sculptor from Holland. He creates strandbeests, or “beach animals,” mainly out of yellow PVC piping which bleaches to the colour of bone in the sun. His beach animals seem to be freestanding bone scaffolds until, to our surprise, they move. Their dainty, complicated steps across the North Sea dunes make them seem uncannily alive. They hesitate, then change direction, almost as though making up their minds which way to go.

The language Jansen uses to talk about his work combines biology and religion. He refers to “genetic codes” and “brains.” His successful creatures are awarded “the privilege of reproduction.” But he also calls the computer model that determined the ideal length of the rods for walking “the 11 holy numbers.” In describing his process he says, “…you discover all the problems which the real creator must have had creating this world.”

“And the Lord God formed man of the dust on the ground, and breathed into his nostrils the breath of life; and man became a living being,” goes the story. Jansen’s first name derives from the Greek word for God, theos. Using modern materials and technologies and the wind as his breath of life, he strives, like that ancient empowerer, to create new forms of life.

And how do we know the strandbeests live? Because, amazingly, they move.

RSS Feed
Caroline Adderson is the author of the novels, "A History of Forgetting," "Sitting Practice," "The Sky Is Falling," "Ellen in Pieces," and "A Russian Sister" as well as two short story collections, "Bad Imaginings" and "Pleased To Meet You." She has won the BC Book Prize, the CBC Literary Award, the Marian Engel Award for mid-career achievement, and a National Magazine Award Gold Medal for Fiction. More Caroline Adderson here.