Performed on stage by Stephen Osborne at Ryeberg Live Vancouver 2012. 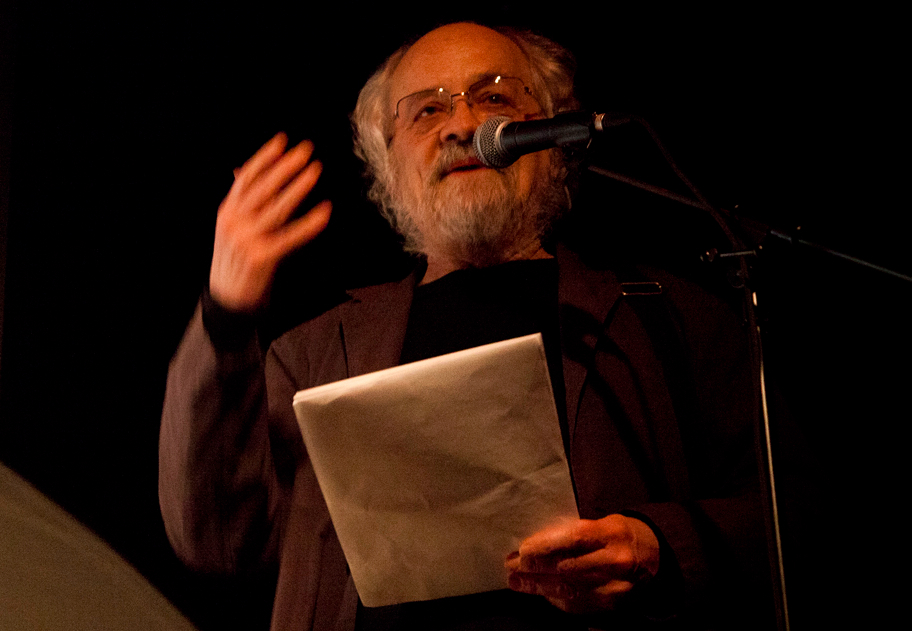 Facts Come to Light is a collection of items taken from the news of the day. I’ve been collecting news items like these for the last fifteen years or so, and have only recently found a way of using them to explore city life as a collation of third person reports. The video that you see here is a fragment of film shot by Seattle filmmaker William Harbeck in 1907 — using a camera mounted on the front of a streetcar. It’s the earliest surviving footage of Vancouver, and has recently been brought to light by the Vancouver Historical Society. The streetcar is making its way north along Granville Street from Georgia up to Hastings; it turns east onto Hastings, then north onto Carrall, west on Cordova, south on Cambie and over to Robson Street. (Notice that Canadians were still driving on the left, a practise that continued until 1922.) The movie was intended for projection in tiny movie houses built to simulate streetcars in motion — an early multi-media platform popular in cities throughout North America and Europe. [The video was projected without sound in a continuous loop throughout the reading.]

A black belt karate expert who intervened in a brazen jewelry-store robbery in a Langley mall was attacked with pepper spray when he grabbed one of the robbers in a headlock, said an item in the Friday paper. If they didn’t have pepper spray, I am sure I would have taken them all down, said the karate expert, who was helped outside the mall and treated by paramedics, said the item. The item said it took the karate expert about forty minutes to regain his sight. The item said police officers had the men involved in the robbery under surveillance and had followed them to the jewelry story. Police detectives can in with their buy complete AR-15 rifles and Emergency Response Team members responded and intervened as soon as it was safe to effect the plan that was in place to arrest the men involved, said the police spokesperson, said the item.

In February, a US Army draftee on a flight to Seattle threatened to blow up the plane, “unless we go to Cuba,” he said, said an item on the CP wire. When he was told that the aircraft didn’t have enough fuel to get to Cuba, he settled for Vancouver, said the item. The item said the tense sky drama came to an end when the hi-hacker, said by the item to be a California youth with long black hair and a moustache, surrendered to RCMP officers at Vancouver International Airport. “No one told us where we were until they hustled him off,” one of the passengers said, said the item. “We thought we were in Seattle.” The RCMP, acting on a request from the FBI, had clamped a lid of silence on the whole affair, said the item. In March, the Prime Minister married a young woman of twenty-two from Vancouver, who was said to be a flower-child in several wire service items issued in the following weeks.

Thieves targetted the Planet Bingo Hall on Main Street on the last day of the year, and fled with the bank deposit bag containing an undisclosed sum, said the first news item in this report. The item said one of the suspects was five feet eight inches tall and wore a black toque and a black handkerchief over his face. A second news item said that a resident of Adams Lake had died while attempting a so-called Polar Bear Swim. Attempts by witnesses to save the drowning man failed, said the item. and he succumbed prior to being reached, said an RCMP constable with the enviable name of Swann, said the item. Early the same morning, gunshots fired at a home in Surrey went through a child’s bedroom wall, said a third item, but luckily none of the ten occupants of the home was injured, the item said. Police said they were unaware of a motive for the shooting, nor would they say if the shooting was gang-related, said the item. At about the same time, in Richmond, said a fourth news item, the corpse of a young man was set afire in a secluded area near the Fraser River. The RCMP constable on the scene said there was a strong possibility that the murder and the burning of the corpse were both gang-related, said the item.

A nineteen-year-old man identified in the news item as a known gang leader was gunned down in an alley near East 43rd Street at two o’clock in the morning, said an item in the evening news. Police found the body, which the item described as bullet-riddled, after responding to a shots-heard-nine-eleven, said the police spokesperson in the item, a constable familiar to the public through her frequent appearances in the media. The deceased had been Vietnamese, said the constable, employing a syntactical nuance implying that nationality ceases at death, and reminding readers at the same time how abrupt is the transition from the present to the pluperfect, once a full stop has been placed at the end of the sentence of life. Officers had not found any witnesses to the shooting, even after doorknocking the neighbourhood, the constable said, said the item. Later items described the incident as a gangland-style shooting, but none of the later items explained the difference between gangland styles of shooting and other styles of shooting practiced in the city.

City police issued an arrest warrant for the leader of an organized group of Algerian pickpockets, said an item in the news early in June. The man, identified by his first and last name, was alleged by police to be part of an organized ring of Algerians specializing in stolen credit cards, the item said. A court document said the volume of thefts and organization displayed by this group place these activtities far above the petty class, said the item. The item said the man identified had been arrested at the Fairmont hotel, and then failed to appear in court. Police said he was alleged at the time to be in possession of $2,100 in Canadian funds, two new watches valued at $1,000 and credit cards and passports belonging to 7 other people, said the item. Police believe he distributed stolen ID and credit cards to other Algerians who used them to commit fraud, the item said. No further items concerning Algerians appeared in the news that year, but 13 months later, police warned the public in an item on the radio to beware of a large pickpocket ring made up of up to thirty middle eastern men working in groups of 3 to 5, stealing wallets and credit cards from purses and backbacks, said the item. A police spokesperson said the pickpockets are trendy well dressed criminals who spot a victim and then move in, asking for the time or spilling some water, said the item. By creating a diversion, then they go ahead and pickpocket or somebody else goes through the purse, the item said.

The item said police estimate their take at up to $5000 a day. The pickpockets, who frequent restaurants, coffee shops, food fairs, Robson Street, Stanley Park and the airport, are all city residents known to police for three years, said the item. Six months earlier, an item on TV had warned travellers to beware of luggage thieves at work at YVR and at local hotels, where their favoured MO is distraction theft, said the RCMP, said the item. If you can think of it, they’ll use it, they’ll drop money, they’ll accidentally bump into you, they’ll squeeze foodstuffs in front of you, said RCMP, said the item. In the previous week, two Peruvian nationals had been caught trying to carry out distraction theft in the check-in line at the airport, said RCMP, said the item, but were apprehended thanks to a a tip from Ontario police warning them of an international luggage theft ring headed toward the Lower Mainland, the item said. The Peruvian nationals were arrested and sentenced to sixty days in jail, said the item. Police are on the lookout for two other thieves of Central American descent who distracted a victim at a Richmond hotel, the item said, by squirting mustard on the ground.

A headline on the front page of the Friday paper said that rogue pine nuts can spoil your appetite for weeks. In the accompanying photograph a thin bald man identified in the item as an organizational psychologist and an avid wine collector holds up a glass filled with small yellow kernels. Since eating some pine nuts in his wine cellar two weeks ago, said the item, this man can’t even drink a glass of wine. It’s the sort of thing that could drive you crazy, the item said. The wine collector has lost two pounds since he was struck by Pine Nut Syndrome two weeks ago, said the item. He simply cannot eat, because everything tastes so terrible, the item said. The nuts were brought to his home, the wine collector says, by an artist friend, says the item.

In January, an irate passenger verbally attacked a driver before beating the driver with an umbrella, the item said; in April, a driver suffered chest pains after a passenger threatened him with a skateboard; passengers have also struck drivers with canes, fists, and, near Rupert Street and Grandview Highway, said the item, with grizzly bear spray. The first issue of the transit newsletter soon to be called the Buzzer was published without a name on the 2nd of June, 1916, and featured an item offering a prize of $15.00 for the best name suggested by a member of the public. The names of similar publications listed by the item by way of example included the following: Seattle: The Electrogram; Portland: Watts Watt; Baltimore: Trolley News; and Sioux Falls: On The Cars.

RSS Feed
Stephen Osborne is the publisher of Geist Magazine, which he founded in 1990. He is also co-founder of the literary publishing house, Arsenal Pulp Press. He has published a collection of essays, "Ice & Fire: Dispatches From The New World: 1988-98," and is the recipient of the CBC Literary Award, the Vancouver Arts Award for Writing and Publishing, the National Magazine Foundation Special Achievement Award, and the Western Magazine Award for Lifetime Achievement. For more Stephen Osborne, go here.