Return Of The Scopitone

As a word, “Scopitone” looks and behaves quite differently than “YouTube.” At the very least, the two appear deeply, declaredly of their time.

YouTube is, of course, what we are used to now — a compound, pronoun-based signature of Web 2.0, what Caleb Crain recently called “camel case.” Scopitone is what we assume they were used to then: A cue to the wonders of analog, in the vein of CinemaScope but also of the earliest film and film-like contraptions: Phenakistoscope, zoetrope, Thomas Edison’s Kinetoscope, and the like. 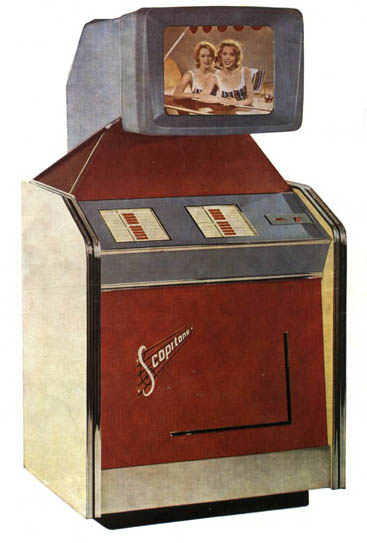 And this was, in fact, what “Scopitone” was. Introduced into the French market in 1960 as an audio-visual jukebox — the screen sat on top, and the films were 16MM with a magnetic sound strip — the Scopitone had a novelty that was quaint even on arrival. It has been called a precursor to MTV. Nancy Sinatra’s iconic “These Boots Are Made For Walking” film, deemed by some as the first music video, was initially shown on “Color-Sonics,” a Scopitone knockoff.

In 1964, the year Scopitone was introduced to America by 31-year-old Miami Beach lawyer Alvin Malnik (who later called on Debbie Reynolds’ Harman-ee Productions for funding), a TIME magazine article called Scopitone a successor to the “Soundies” of the 1940s, musical films which played on similar devices in nightclubs, amusement parks and bus terminals. The article also noted that the inventor of the Scopitone, the French firm Compagnie d’Applications Mecaniques à Electronique au Cinéma et à Atomistique (CAMECA), sounded “as if it had been founded by Jules Verne.” And indeed it does.

A short NPR documentary about Scopitone finds Dick Hack, the last surviving Scopitone repairman in the country, who says “they were a nightmare for the operators; they had a lot of little things that could go wrong.” Rube Goldberg couldn’t have done it better.

That Scopitones have returned via YouTube isn’t surprising — as we all know, the site is a go-to place for kitsch, past and present — so much as it is delightfully à propos. Aside from individual channels, places like Scopitone Archive, Le Scopitone! and Scopitones.com (affiliated with retro-footage hub Bedazzled!) index and post each film as it is unearthed. Tumblr is a boon for Scopitone, its optional French-window format providing a fabulous latticework of juxtapositions.

A few months ago, after keeping my years-long fixation with Scopitone relatively quiet, a friend sent me this, a nutso hippie-Sadean dance routine by a troupe called Les Ballets Jackson, which had been picked up by Boing Boing:

Scopitone’s penchant for threadbare outrageousness — few of their films lack gyrating go-go dancers; many of their stars were only moderately known at the time — is, obviously, perfect for our viral age, and a reminder of the redundancies of modernity’s endless parade of image-based novelties. In an essay about Thomas Edison and Eadweard Muybridge, Jonathan Lethem rightly points out, following film scholar David Thomson, that YouTube signals the return of Edison’s boxy, voyeuristic kinetoscope aesthetic. 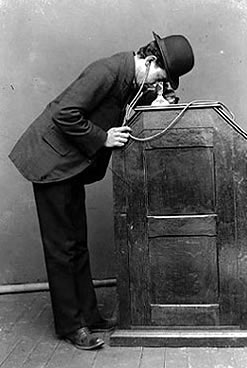 The kinetoscope was a coin-operated public machine like the Scopitone, but had to be consumed singly, through a viewfinder. (The abundance of harem women and scantily clad actresses on the looped filmstrips in such machines, announced in teaser plaques affixed to their sides, speaks to the odd private/public dialectic of this and all kinds of cinema.)

Scopitone is merely the flipside: Meant to be enjoyed publicly, it was largely for purposes of shared titillation and ridicule, but dependent nonetheless on private selection — on the will of the user and that essential drop of the coin.

Still with relatively low resolution and bandwidth, YouTube mimics this pattern of consumption. You may watch videos at the office and then share them with friends, virtually or via a crowd around your monitor; you may watch videos to get off or have a YouTube party; regardless, you are sharing these videos with other users, most of whom you have never met, but whose nebulous presence defines the quality and intent of the image.

The fact that the kinetoscope frame is about the size of an embedded YouTube video, and that the Scopitone frame is just slightly bigger, 26 inches, than a maximized video on an iMac, reinforces this kinship.

As with YouTube — and as evinced by the inimitable Ballets Jackson — Scopitone is capable of rarer, more unreliable pleasures, ones often belied by its easy, predominant vulgarity. Yes, the ratted hair and limb flailing are fun, but occasionally one comes across something like this:

Naturally, what is interesting here is not how the film eschews or even subverts Scopitone tropes (er, Scopitropes?), but rather how Benton’s song, which he wrote, gets awkwardly absorbed—that is, literalized — by the conditions of this production. The dancers actually have the world on a string; words from the song actually appear on a signpost which, despite the song’s lines’ dark import, Benton delivers with a smile.

Then there are the personifications, Father Time and Mother Nature, whose exposed flesh and burlesque spasms suggest vaudeville or opéra bouffe. Such suggestions — one American and one French, emblematic of the cross-Atlantic push-pull that defines so much of 20th-century culture, especially early musicals and, yes, early cinema — are not coincidental. They are the time-honoured means by which something like Scopitone gets our attention.

Again, as with Scopitone, so with YouTube: Artistic ambition and, at times, utter philosophical seriousness become amplified through a tawdry, obstreperous, hilarious stupidity.

But what if Scopitone — which, despite the aforementioned alliances, significantly diverges from YouTube as an assembly-line, rather than a user-generated, product — had an intimate, authorial voice? (Robert Altman directed Scopitones, though which, exactly, is a subject of debate; Scopitones.com has verified one with Herb Alpert, though more have been claimed as his.)

My guess is that the same director—or at least some of the same personnel—was responsible for “Mother Nature, Father Time” and the following Scopitone by underrated singer-songwriter Gale Garnett (most famous for the AM radio staple, “We’ll Sing in the Sunshine”), one of my very favourite things on YouTube.

Playing, as she does in the song’s lyrics, a good-time girl who feels she’s lost her way, Garnett reflects on a life of Dionysian globe-trotting. As with the Benton Scopitone, the lyrics get literalized in the mise en scène, and we see her in London, Bombay and… hell, before she packs her suitcase, leaves her bedroom and heads past a signpost in the direction of “TRUE LOVE.”

It’s as if Garnett, who soon went West-Coast psychedelic as a vocalist for a band called “The Gentle Reign,” is bidding farewell to the Scopitone, which was essentially kaput by the Summer of Love, its aesthetic too small for the egos of her generation and, it turns out, just intimate and strange enough for those of its children.

RSS Feed
David Balzer is the author of "Contrivances: Short Stories" (ECW) and "Curationism: How Curating Took Over the Art World and Everything Else" (Coach House Books). His writing on visual art, film, and theatre has appeared in Toronto Life, Canadian Notes and Queries, Cinema Scope, Maisonneuve, The Walrus, and Toronto's EYE WEEKLY. More David Balzer here.