Performed on stage by Kevin Chong at Ryeberg Live Vancouver 2013. 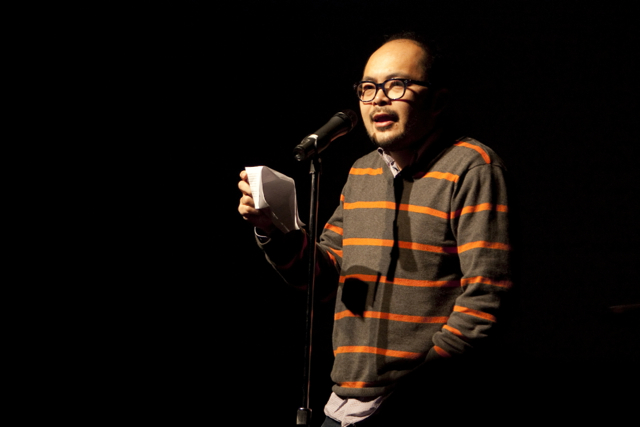 For me, teaching has been a trial-by-error experience. At the university level, there are X number of class hours. It’s been getting better over the years, but I still have probably X minus Y hours of advice to deliver them. The rest is filled by in-class discussion, writing exercises, and participation.

I don’t envy the high-school English teacher who has even more class hours to munch over a ten-month term, so I don’t begrudge them the type of projects they use to engage their students and fill their blocks. One popular activity is the video adaptation of a work of literature, many of which have surfaced for public consumption on YouTube.

The video project takes two forms. The more straightforward one is the dramatization of the scene. Here is a video adaptation of Emma Donohogue’s “Room,” which is about the story of a young woman who’s been imprisoned in a back yard shed and repeatedly raped. The novel is narrated by the unnamed woman’s five-year-old son (born after another child she gave birth to died). The story’s power lies in the dramatic dissonance between the child’s carefully protected world view and the horror that he’s been kept hidden from. Here we get teenagers playing grown men, abducted women, and five-year-old children. In their hands, an emotionally wrenching story about enduring innocence becomes a prolonged exercise in suppressed giggling.

GuitarMaster310, “Movie On Room By Emma Donoghue For English Class” (2012)

The second one is the movie trailer. The video I’ve chosen is an adaptation of “The Catcher in the Rye.” It’s been widely reported that Steven Spielberg once called J.D. Salinger’s literary agency to offer $5 million to adapt Salinger’s only novel. A movie buff, Salinger hated the one movie adaptation of his fiction and refused the offer without much irritation. This hasn’t stopped countless English students from giving us their unauthorized dramatizations, including this movie trailer.

If you’ve never read “The Catcher in the Rye,” this trailer will not tell you what the story is about. The bits from the book are blanched and flavoured by the heavy-handed theme music into the outlines of the inspirational story of a boy in a deer hunter hat learning to—I don’t know—speak his heart… dance… fly? Incidentally, the music is lifted from “Dragon: The Bruce Lee Story.”

I can see why teachers would assign these video projects. They require students to work together, and to actually read the material and demonstrate their comprehension of it, but what do these videos teach students about literature? In most of these clips, it seems like students are really learning about how movie adaptations are made: how internal monologue is excised and replaced with dramatic action, how picareques plots can be given three-act structure, and so on.

They also learn the grammar of the movie trailers: the taglines and soaring music, the implicit guarantees of catharsis. Take for example this adaptation of Charlotte Bronte’s “Jane Eyre.” Even though it’s played for laughs, it has all the taglines, even the fashionable feminist rereading, in the right places. This time the music is even more familiar; you’ve heard it in trailers for sports events and video games and movies (“Babylon A.D.,” “I Am Legend,” and “Sunshine”…). It’s the “Lux Aerterna” score by Clint Mansell of the band Pop Will Eat Itself.

Are these students learning more about video editing and movie marketing than they are about reading and interpreting literature?

Looking at these videos, one needs to search vigorously for ones that exemplify an ability to absorb a book. Northrop Frye once wrote that the poet uses simile and metaphor “in the most uninhibited way, because his job is not to describe nature, but to show you a world completely absorbed and possessed by the human mind.” Visually demonstrating one’s appreciation of a work demands a reaction that doesn’t simply recreate a narrative but shows that absorption and possession.

The best videos therefore are the ones that don’t try to adapt a book or sell us on one, but respond to them, recreating the mood the book evokes. I think this adaptation of Haruki Murakami’s short story, “On Seeing the 100% Perfect Girl,” a story of a young man who passes by his ideal companion on the street and then imagines the perfect they life they might lead, does the trick.

The image of a the narrator, answering an offstage interviewer or therapist, then revisiting a projection of the image as though it were the Zapruder film are visual similes and metaphors that not only mirror the original story’s themes of obsession, romantic hyperbole, and personal inertia but darken them. Normally, it’s the movie of the book that whitewashes the darker elements of the source material; in this case, the filmmakers see how this romantic projection could suggest someone who takes his fixations too far.

In conclusion, my recipe for a 100% Perfect Video can be summed up this way: those who can read a book, find a way to feel and respond; those who can’t, act it out.

How To Make An E-Book In 8 Easy Steps

RSS Feed
Kevin Chong is the author of the novels "Baroque-a-Nova," "Beauty Plus Pity" and "The Plague" (a retelling of Albert Camus' 1947 novel). He has also written a memoir entitled, "My Year of the Racehorse," and two hybrid biographies: "Neil Young Nation" and "Northern Dancer: The Legendary Horse that Inspired a Nation." He was born in Hong Kong and raised in Vancouver, where he currently lives. Find him lying in the bed that he made here.