“As long as man was allowed to remain in Paradise, either (like Valentinus’ Jesus) he did not defecate at all, or (as would seem more likely) he did not look upon shit as something repellent. Not until after God expelled man from Paradise did He make him feel disgust… The objection to shit is a metaphysical one. The daily defecation session is daily proof of the unacceptability of Creation. Either/or: either shit is acceptable (in which case don’t lock yourself in the bathroom) or we are created in an unacceptable manner… Kitsch is the absolute denial of shit, in both the literal and the figurative senses of the word; kitsch excludes everything from its purview which is essentially unacceptable to human existence.” — Milan Kundera, “Unbearable Lightness Of Being”

Slavoj Žižek, “Toilets And Ideology” (from “Why Only An Atheist Can Believe,” 2006)

There is no such thing as a purely utilitarian device, he says. The toilets of Britain, France and Germany offer specifically British, French and German shitting experiences. What experience is offered by this kitschy solid-gold toilet valued at over $29 million? It’s in Hong Kong, and off limits to tourists except as an object to be photographed through a glass window for a fee of $20. 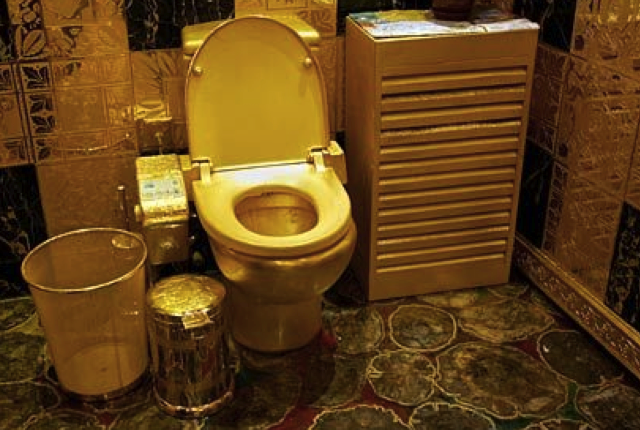 The ideological content of this toilet is not what you might expect. Its designer, Lam Sai-Wing, claims he was inspired by Lenin who declared in 1921, “When we are victorious on a world-wide scale we will make public toilets out of gold on the streets of the world’s largest cities.”

The current trend in toilet design is evidenced in the following instructional video for the Washlet, a toilet—nay, personal cleaning system—that offers the user a nearly sensory-free toilet experience. That is, you can empty your bowels without registering any visual or olfactory evidence. And if that isn’t liberating enough, it’s also hands free.

bideteasyclean, “Different Features For Men Or Women Using Our Product” (2010)

In essence, it’s toilet as denial device. You can pretend that unlike everyone else on the planet, your body produces no waste. Like one of those couples we’ve all heard about where, despite having lived together for 40 years, they’ve never had so much of a whiff on another’s excrement. “I just don’t want him to see me that way,” the woman in the story always says uncomfortably as she waits for her husband to go out to his squash game.

It is not bodily functions writ large that our culture disdains. Eating is not only socially acceptable it’s almost a social demand (the taboo of dining at a restaurant alone, for example). Shitting has been singled out as the bad thing our bodies do, the dirty thing. What is clean about a mouth covered in sour cream film and peppered with ground beef crumbs?

We needn’t look far into history to see defecation readily accepted as just one bodily function among others. For the Abyssinians, the Ojibwa, the Iroquois and the Patagonians human waste was a necessary ingredient in undoing evil spells and conducting exorcisms. Hippocrates and his early doctor friends used excrement to treat epilepsy, mania and other psycho-social disorders.

Like the Romans and the Moabites and lovesick maidens in France, the alchemists of Europe believed in the spiritual powers of human waste, which ranked among the strongest of all magnetic medicines. The great Paracelsus, father of modern pharmacology, kept a store from which he hoped to conjure’ nothing less than the philosopher’s stone. “Man’s dung, or excrement, hath very great virtues,” he wrote, “because it contains in it all the noble essences.”

Which brings us back to Zizek’s second observation that common to all toilets is the fact they are empty. Toilets perform a magic trick; our shit is the dove under a top hat: Poof, no dove.

“One of the ways you know you are dealing with humans and not apes,” Zizek says, “is that you have this embarrassment about shit… that it must disappear.” This is because we are disgusted by it. “Disgust is when you confront something from your inside on your outside.”

Disgust is cultural. Shit represents everything about the human condition that we deny in order to soldier on: our animal side, our fear of death, our secrets, our shame. The things we can’t easily handle. Toilets are one of the mechanisms for removing what we’d rather not see, as are mental asylums and funeral homes. We lock people up so they don’t run naked through the mall. We put makeup and clothes onto the corpse of our beloved so it looks like they are simply taking a nap.

New Yorkers would rather not know that their collective excretions are stewing in treatment plants beneath their feet, and that this fecal sludge is spilled into giant barges and carried up to Wards Island where it is poured into a giant centrifuge and spun into a dry, black dust cake, and that this cake is loaded into eighteen-wheelers to be processed by a fertilizer company and turned into a nutrient-rich pellets that will eventually end up in Florida’s orange groves. That’s right, our own shit nourishes the food we eat, as it has done through the ages.

The Adi people of India’s Arunachal Pradesh enjoy the metamorphosis of their own excrement into a desirable and tasty treat. What could be more efficient? Is this not a healthier approach? Denial seems somehow outdated. Like a joke we’ve already heard. Kitsch.

Let me propose that the way forward is with this man. His attitude toward shit is the attitude of the future.

Jack is our man for many reasons. Men in suits tend to say “excrement.” Jack wears a suit and says “shit.” When he talks about shitting he doesn’t treat it like it’s something he only studies but never does. To demonstrate a particular toilet he gets right up on the display and enacts the taboo ritual.

He’s not trying to civilize anyone. His motivations are purely practical. In fact, he seems to understand that toilets don’t offer an objectively better experience. Squatting in a field, with the wind in your hair and the sun on your back while chit-chatting with your friends is a pleasure to be reluctantly given up. It’s far more appealing than sitting alone in a dark, dirty little outhouse.

Which is why the sanitation argument—“treating the Ganges as your waste place is harming your family and everyone around you”—is not strong enough. Preference does not respond to facts. And if the outhouse is going to compete with the wide-open sky it can’t be dark and dirty. People need to see the toilet as an object of desire, says Jack to a room full of toilet providers. Like a Louis Vuitton handbag or whatever else the Jones’ are into these days. It’s a matter of capturing hearts and minds.

For Jack, the toilet is not a way of banishing disgusting human ejecta but a way of harnessing their potential. If we befriend shit it can provide valuable things like nutrient-rich fertilizer and soil and even an energy source. 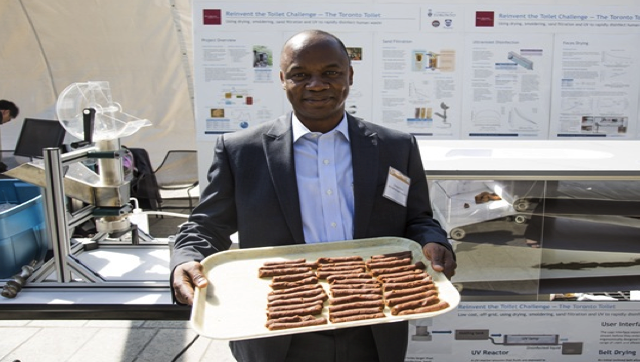 What Jack Sim does not acknowledge is that he’s addressing one of the deepest human struggles. He might as well be saying: if you learn to love what threatens your identity, life will get easier and the future will be brighter. A lot of energy is freed up when you can look at the man running naked through the mall and think only: “There he is!”

I’d wager that only a few weeks of practice would allow us to accept what we work so hard to deny: “One day I will die and like orangutans and coyotes everywhere I have desperate, irrational impulses that make me feel wild.” How liberating would it be to stride confidently towards the bathroom, with no concern for anyone’s squash game?

We have been cast out of Paradise. Let’s feel free to support Jack Sim’s efforts to talk shit.

A White Boy’s Defense Of Avatar

Story Of The Land

RSS Feed
Mary Albino lives in Toronto and writes on economics-related subjects. She tends to ask “how” questions. For example: How come people live so differently from how they want to live? Or: How does a person become less poor, not in principle, but actually? She’d also like to know: Under what circumstances do people give their money away? Ryeberg thinks it's worth mentioning that Mary occasionally plays the violin.